More any other genre, classical music is best at expressing certain feelings.  For this reason, movies that use it can be especially captivating.  However, that is only part of the reason that I found Amadeus to be an astonishing film.  There are chilling undertones of jealousy and murder which make it both fascinating and thrilling.  Though many films have attempted to achieve this exact same feel, this is the first that has accomplished it so elegantly.

Most everyone has heard of Mozart.  He was a child prodigy and wrote heavenly music, but he died a young father and husband.  Mozart would never find that one of his colleagues, fellow composer Antonio Salieri, had once planned to murder him out of envy.  Salieri, vividly portrayed by F. Murray Abraham, could not bear the extreme jealousy that filled him when he discovered Mozart’s talents.  But Salieri was determined to be glorified as a great composer. So he convinced Mozart to compose a Requiem that he could steal and call his own after murdering him.  The theme of Amadeus is not the death of Mozart but instead what drove Salieri to murder. It was too much for him, knowing that he was completely incapable of what Mozart did so effortlessly.

Mozart’s work is the perfect soundtrack for this biographical film which also features a great group of performances, a superb script, and exquisite sets and costumes.  Amadeus is a film that stands high above all other period dramas, it is beautiful, unforgettable, and one of the few movies that can honestly be called a timeless masterpiece.  Not even in One Flew Over the Cuckoo’s Nest has director Milos Forman gotten so close to perfection.

“I see the worst in people.  I don’t need to look past seeing them to get all I need.  I’ve built my hatreds up over the years, little by little…”

These are the words of Daniel Plainview.  He arrived at the small California community of Little Boston in 1907 in search of somewhere to drill for oil.  Accompanying him is his son, H.W., whom he keeps by his side constantly.  Each day, he brings H.W. along to show him the ways of his trade.  Not only is he a slick businessman, but he is also an ambitious one, and everything seems to be going right for him until disaster strikes during drilling one day.  This event is the breaking point for Plainview, who then finds it near impossible to keep his temper concealed.  It is only then that we see the man as he really is.

In a vivid Oscar-winning performance, Daniel Day-Lewis embodies the character of Plainview.  On the opposite side is Paul Dano depicting the foolish pastor who the oil man claims as his enemy.  Both are great performances, but they are not all that captivates those who enter into this film.  The expansive desert setting, the chilling musical score, and the wonderful direction evoke just the right feelings from the audience.  Even though it can be received as entertainment, it is also a great work of art.  If it had not been pitted against the Coen’s No Country for Old Men in 2007’s Best Picture race, there is no doubt in my mind that it could have nabbed the award.

Even without a statuette, There Will Be Blood is an instant classic.  Most filmmakers might have been tempted to make a conventional Hollywood drama or action thriller when given the source material of Upton Sinclair’s Oil!.  I am certainly glad that director Anderson made it the way he did.  His atmospheric epic seems to have taken some lessons in characterization from Henri-Georges Clouzot’s dark, grimy The Wages of Fear.  When considering this, it is no wonder I enjoyed it so much. 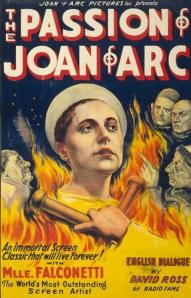 The power of Carl Theodor Dreyer’s riveting masterpiece doesn’t come from beautiful scenery or a sweeping score.  Instead, The Passion of Joan of Arc is nothing but the bare bones of a historical epic.  It is interesting to take note of the smooth, barren walls and ceilings in which the indoor scenes are filmed.  The costumes as well, though authentic, are equally boring to look at, establishing the film as the complete, polar opposite of the visual delight, Gone With the Wind.  Even without intricate wallpaper designs and fancy props, it is captured in innovative close-ups that show more detailed faces and expressions than one is ever likely to see again.

All of the elements in Dreyer’s film add up to exactly what he set out to make: a documentation of an essential event in the history of France.  Anything that should distract from its purpose (movie stars, special effects, extravagant sets, etc.) was not included.  Dreyer’s refusal to dress up his story not only makes The Passion stand out, it elevates it to the status of an all time great.  Anyone who knows anything about silent films should be familiar with the face of Maria Falconetti.  Her incredible performance as Joan of Arc, a Frenchwoman executed for claiming to be called by God to save France, is one of the most powerful ever put to film.  When considering how silent films had to resort to images alone to express emotion, the success of such a plain film as Joan of Arc may seem like a mystery… until one looks into the eyes of Maria Falconetti and finds all the reasons why.

Without any flashy effects, The Trial remains the most realistic depiction of a dream that I have ever seen.  If, that is, that Orson Welles meant it to be so.  Although it is not pertaining to the central conflict of the narrative, I constantly juggled the ideas that I had relating to how the film should be received. If it is supposed to have any  applications to everyday life, I must have missed them.

But it is very easy to see how I was fascinated.  The film begins with a short fable narrated by Welles.  The tale is one told by the inhabitants of the world that we are about to visit.  Once we get there, the intrigue from the very beginning carries over to our introduction to Joseph K., played by Anthony Perkins.  The scene begins with Joseph lying alone in his bed.  In any other movie, this would be insignificant, but does Welles mean it as a hint?  Could he have warned us from the start that it is all just a dream?  Dream or not, Joseph never considers the question.  This is real life to him.

We are then gripped by the revealing of a visitor in the bedroom: an inspector whose purpose is to arrest Joseph for an unnamed crime.  It all seems perfectly normal up to that point, but as we see Joseph’s workplace, his friends, and his accusers, his world begins to seem reflective of our dreams…or nightmares.

There is a scene with a wooden shack sitting at the top of a spiral staircase within a brightly lit building.  The police inspector steals Joseph’s clothes.  A man enters a doorway and later exits to discover that the door is now twice as big.  It is really very incredible that The Trial can appear so nonsensical, resembling the films of Bunuel and Lynch, yet still keep a firm grasp on our attention and emotions.

Ten years of after Rashomon, the great Akira Kurosawa was still at the top of his game when he made Yojimbo, the darkly comical ‘samurai western’ that inspired Sergio Leone’s A Fistful of Dollars.  Toshiro Mifune stars here and he was obviously the model after which Clint Eastwood fashioned his own legendary performance.

The picture’s storyline is simple, but it is so well done that the audience might not notice.  It tells of a wandering samurai (Mifune) who stumbles on a town split in half.  Each side despises the other and hires men to fight against its enemy.  The samurai, named Sanjuro, soon upon arrival exhibits his skills with a sword and is begged by both sides to join the fight with them.

But Sanjuro is a clever scoundrel and decides to wait for the best offer.  It is only a matter of time before he has to make a choice and become part of the battle.  With his entrance into the battle comes a bloody massacre that eventually eliminates both sides.

The brutal ending finishes the film with a dark tone, but Kurosawa has sprinkled around just enough witty humor to balance it all out.  The memorable score plays a major role, making the action more excitable and the emotion more palpable.

Kurosawa’s techniques in storytelling and camera work look as masterful as they ever have.  I enjoyed this picture as much as I did Rashomon, and I highly recommend it.  Whether or not you have seen a Japanese film is irrelevant, for Yojimbo would be a great introduction.