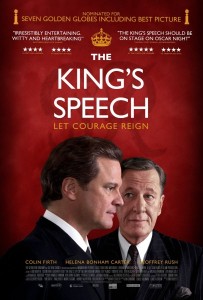 “What we’ve got here is a failure to communicate.”

Though these are the famous words of a much different film, they are very representative of this one.  The King’s Speech tells a fascinating true story of a newly crowned king who is still living out the results of his childhood.  With a quick temper and a constant stammer, King George VI is taken to the unorthodox speech therapist, Lionel Logue.

George, at first reluctant, is eventually shown that Logue can help cure his problem.  The king’s stammer is the tragic result of a repressed childhood, one of fear and hesitance.  We find that he has been mocked because of the now-inescapable habit, and in turn, that he masquerades a cold, quiet, stubborn personality because this is the only way that he has been treated.

Logue’s persistence and loyalty soon transforms their relationship into an extremely touching friendship.  The Oscar-worthy performances of Colin Firth, Geoffrey Rush, and Helena Bonham Carter help ensure that we are moved.  The cinematography is also well-captured, putting characters to one side or slightly off-center of the screen.

There are a few lines that are very quotable, but nevertheless, the entire script is excellent.  The film’s mixture of comedy and bittersweet emotion make it a truly triumphant crowd-pleaser.  Its appearance as a period piece does not confine it to certain elements that some shy away from.  This is 2010’s Best Picture winner and few seem to disagree with the academy’s choice (for once).  The King’s Speech is a film anyone can love, for its acting, camerawork, dialogue, story, humor, and emotion are all pitch-perfect.