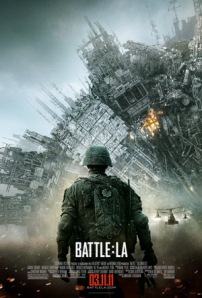 Director Jonathan Liebesman has created a mix of The Hurt Locker and District 9 that isn’t half as good as either one.  The script could have been written by an ambitious schoolboy and seems more suiting to be a short film, much less a two-and-a-quarter hour one.  The action and rare moments of suspense are the only things that kept me in the theater.

Filmed in a sort of documentary manner, earth is victim to an alien invasion.  One of the cities that are being attacked during this global war is Los Angeles.  This world-famous city, as you might have guessed, is where the story takes place (though filmed in Baton Rouge).

Throughout the movie, we follow a platoon of U.S. Marines who are sent on a mission to save a group of civilians taking refuge in a police station.  The cast is led by Aaron Eckhart, who isn’t as easy to take seriously as intended due to a bit of laughable dialogue.

The hand-held camera work is hard to adjust to due to the editing, which makes it impossible to observe anything for more than three seconds.  The camera also abuses the ability to zoom, trying to create a realistic feel, but viewers are forced to get uncomfortably close to the off-setting characters.

I didn’t start to dislike Battle: Los Angeles until the last half of the movie, and simply because it seemed to last to eternity.  Though the action is an intense, electrifying ride, it cannot redeem the whole film.  There are just too many obvious flaws to discuss.