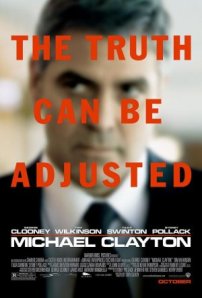 Michael Clayton is the ‘fixer’ for a New York law firm engaged in a class-action law suit, when one of the firm’s legendary attorneys uncovers evidence that they are on the “wrong side.”  Clayton, brought to life by one of today’s finest actors, George Clooney, is cool and intelligent, but thanks to Clooney, a softer side is subtly revealed.  Accompanying him are actors Tom Wilkinson, Tilda Swinton, and the late Sydney Pollack.  Wilkinson is the attorney who loses his job and eventually, his life, after making a vital discovery; it is an Oscar-worthy performance.  Swinton (also known as the White Witch in the Narnia movies) actually did win an Oscar for her bit as a lawyer opposing the actions of Wilkinson.

Clooney’s poise makes for the best performance in the bunch, but Michael Clayton boasts more than good acting.  Tony Gilroy’s directorial debut is pulse-pounding and above all, impressive as a first-rate paranoia thriller.  The striking score, the abundance of blue and gray, and the building suspense create a wonderfully ominous tone.  It is this tone that makes the whole picture stand out among other thrillers.  Sharp dialogue is common here, as well as a truck-load of details.  Every member of the audience who wants to get his/her money’s worth out of this film will have to pay attention.  While the movie is pitch-perfect, it moves rapidly and it can be easy to fall behind.  Keep up and you’ll be happy that you were along for the ride.

Michael Clayton never really had a chance of winning Best Picture at the 2007 Oscars, especially over two masterpieces as incredible as No Country for Old Men and There Will Be Blood.  Nonetheless, it was nominated because it was well-made, and should not be missed.  It will always be a favorite to those who love movies that require them to think and be fully alert.