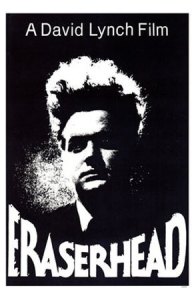 There is no movie like Eraserhead and no filmmaker like David Lynch.  Lynch’s feature debut is a film of images and sounds, but hardly one of dialogue.  He has created a world that is thoroughly encompassed in shadows and a character that is constantly haunted by nightmares.  But in reality, Henry already lives in a nightmare.

His newly wed wife has left him and he has been forced to recon with their hideously deformed baby.  The room Henry inhabits is inside a dimly lit hotel; this is where the majority of the film occurs.  But between obscure visions and a brooding performance from Jack Nance, viewers will stay occupied and continue to wonder what’s going on.

Lynch’s approach is very much that of a surrealist, and it constantly reminds me of a cross between Bunuel and Burton.  But Bunuel’s films are not this modern and Burton’s mind is too fanciful to make something this repulsive.  Eraserhead, over the years, has become a cult classic.  It demands very specific tastes, but those who find quirky, dark, and graphic horror films savory will be catered well.

So whenever you see a movie such as this one, you can love, despise or admire it.  Eraserhead is certainly not a bad film, but rather a bizarrely unattractive one.  Its message could exist under all of the horror elements as a study of the human conscience.  The baby represents a great sin, and its constant screams ensure that he will never forget his part in it.

Lynch’s film has acquired a large group of dedicated followers since its 1978 release, but it was not to my tastes.  I am of the crowd of admirers, but not the group of loyal lovers.  The vision is fantastic, but I was too repulsed to name it a masterpiece.